This page originally appeared at http://members.aol.com/valsadie/dandridge.htm -- see explanation for the new location...

EXTRA! EXTRA! LET ME SHOUT IT FROM THE ROOFTOPS!

Dorothy Dandridge's long out of print and notoriously difficult to find autobiography, "Everything and Nothing: The Dorothy Dandridge Tragedy" has been re-released and is back in print! (Although I must mention that the subtitle used to be "The Dorothy Dandridge Story," which I guess just wasn't "dramatic" enough -- and I'll bet if Dorothy were still alive, she wouldn't be happy about the change one little bit and she'd tell these publishers where they could stick their "tragedy"--! But I digress...) Anyway :>, if you've only read the other two biographies, I implore you to read Dorothy's own work, co-written with Earl Conrad. Also, keep in mind that it's this book that Janet Jackson holds the film rights to, so if Janet decides to star in her own cinematic version of Dorothy's story, it would be adapted from this work.

See my reviews of various Dorothy Dandridge books below!

Congratulations to Halle Berry for winning a Golden Globe for her performance in "Introducing Dorothy Dandridge!"

HBO premiered their original screen presentation, the film biography, "Introducing Dorothy Dandridge," on August 21, 1999. Halle Berry not only starred in the film portraying Dandridge, but also served as executive producer.

For those of you keeping score at home :>!

Halle was on the cover of the September 1999 Shape magazine.

And Halle was the cover story in the August 22, 1999 Parade Magazine.

Click on the name Donald Bogle in order to find more books on the history of African-Americans in the entertainment industry, especially in the area of film.

If you're interested in some of his books which are now out of print, or the rare first editions of the above books by and about Dorothy Dandridge, try using the online bookstore for rare and out of print books:

To find the available books about her, click the name below:
Dorothy Dandridge

Also, check with your local library! Click here for the list of public libraries at Yahoo! Yellow Pages to find a library near you. Good luck :>!

My local library was able to get me this book through interlibrary loan. This is a story of Dandridge's life as told by someone who obviously loved Dorothy very much (Mills and Dandridge had a personal friendship as well as a professional relationship). Being her manager, Mills had access to and shows here many, many photos of the beautiful Dandridge.

On the outside looking in, Mills tells the story of a woman who seems to have been abused -- physically, emotionally, at times sexually -- since day one. But she was very smart and very talented and she knew what she wanted. And for the most part, she accomplished it -- she was the premier black American actress (as well as sex symbol) of her generation. She could act, she could sing, she could dance -- she seemed to have it all.

But Hollywood was not really ready for Dorothy and it showed; Dorothy was a comely, sexy romantic lead in her pictures, but whether or not she could just kiss her often white male co-star would throw the producers and the studios into a tizzy, resulting in a frustrated Dandridge acting in movies where her reel relationships were more implied rather than shown.

Bankruptcy and ill health contributed to the decline of Dorothy's later life and career. Still, she persevered and was on the way to making a comeback -- but this was cut short by her untimely death. It was Mills who found Dandridge lying on the floor of her apartment. But was it a suicide or an accidental death? Similar to the deaths of Hollywood legends Judy Garland and Marilyn Monroe, we may never know...

My local library was able to get me this book through interlibrary loan as well. Dandridge's take on her life is very different from the biographies -- if for no other reason that the book is full of Dandridge's effusive and self-deprecating humor!

But don't be fooled; Dandridge's life is a very complex one. Basically this is a memoir, but it's so much else. It's a story of love and marriage and motherhood and divorce and lust (and yes, in that order!). There's the joyful laughter of nostalgia mixed with the bitter tears of regret. There's the realization of hard-fought ambitions, there's haughty glamour, there's acute despair. In some ways Dorothy was the queen of self-preservation, yet you could almost call this book the world's longest suicide note. Dorothy truly had everything and nothing and that is bluntly yet gracefully explained in this book.

Dorothy was a star at a time when talent, ambition, beauty, class, and ability was in no way valued in a black woman, just was not asked for by the larger society, much less encouraged, cherished, and held dear. The real tragedy of her life is that she is not remembered by more people. Reading about her has convinced me more than ever that we all need to listen, hear, and heed the story of Dorothy Dandridge.

Noted film historian Donald Bogle's book is certainly the most definitive work to date on the story of Dorothy Dandridge. Seeking a finer attention to detail than other writers' takes on Dandridge, Bogle's book weighs in (literally!) with over 600 pages on the groundbreaking star. It's not a book to be taken lightly :>, and relays a dramatic and heartbreaking tale.

Bogle starts the story a couple of generations earlier than others, focusing on Dandridge's grandparents and especially her mother, Ruby Dandridge, who had her own successful acting career. There's also an interview with Dorothy's sister, Vivian Dandridge, which begins the book.

Despite these moments, Bogle's book does lack the intimacy of the earlier books by Mills and Dandridge herself -- which is to be expected, I guess.

(Don't know all these names? Look 'em up! Check the Internet Movie Database.)

Find out more about this DVD at Passport Productions. 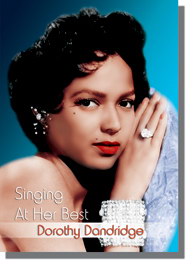 Dorothy Dandridge: Singing At Her Best

Find out more about this DVD at Passport Productions.

FYI: It's the soundies mentioned on my Dorothy Dandridge Memorabilia Vendors page and previews/trailers from some of Dorothy's movies... which are more or less in the public domain. Sorta.

Thanks to RareHollywood.com (formerly RareVideo.com), it turns out that you can get a video or DVD copy of "Porgy and Bess!" No, I'm not kidding! Maybe you don't know how amazing this is! Maybe you're not aware of the drama behind this movie, which may star Dorothy, Sidney Poitier, Sammy Davis Jr., Pearl Bailey, Diahann Carroll, and Brock Peters, and has, in small roles, Maya Angelou and Nichelle Nichols, but which so displeased the Gershwin family that it pulled rank on everybody and withdrew all copies from general release and demanded that it no longer be seen on television or in theaters without express permission from them--! So if you're curious, or better still, if you remember the film and liked it and weren't aware that it was in some kind of creative house arrest, request a quote or make an offer on the video OR request a quote or make an offer on the DVD:

Find out about the drama involved in just making the "Porgy and Bess" film in the various Dandridge book titles mentioned above, as well as in Nichelle Nichols's book, Beyond Uhura: Star Trek and Other Memories.

More films in which Dorothy Dandridge appears (however briefly)...

Get the home video of the 50-minute A&E Biography program, "Dorothy Dandridge: Little Girl Lost," which premiered on August 23, 1999.

Some of these DVDs are available for rental from...

For more memorabilia, do a search on "Dorothy Dandridge" at the premier Internet auction site,  eBay!

Also, see my page of Dorothy Dandridge Memorabilia Vendors (which used to appear in the directory, but was removed as it didn't follow directory guidelines), which is a list of those vendors selling memorabilia of the film actress, especially rare items, such as videotapes of Dorothy's early film appearances, original (or reprinted) posters and lobby cards from her films, etc.

To see more Dorothy Dandridge web sites, click over to the Netscape Open Directory Project and see the sites listed under http://dmoz.org/Arts/Performing_Arts/Acting/Actors_and_Actresses/D/Dandridge,_Dorothy.

Submit your own Dorothy Dandridge page to the dmoz.org directory.

You are visitor number to this page since the counter was reset; this page was first published on America Online on August 8, 1999. Page updated 06/26/2009. Web site created entirely by valsadie@aol.com. Copyright 1999-2010.

See my other web sites...